It was slightly over a month ago when my Nathan Fillion-nut friend @TDAllonsy tweeted this to me:

And when I clicked on that truly shiny link, I reached here. After eagerly reading the witty interview with Nathan Fillion, lo and behold! There was a link to buy an SFX special! The Top 100 Sci-Fi Icons of the 21st Century. Oh my. Should I buy it? Should I sent it to my friend in London, then get it whenever she comes to Dubai next?

A few days back, there was mail for me. I’d all but forgotten I’d bought the magazine. Then when I opened the package, I squealed. It was here! 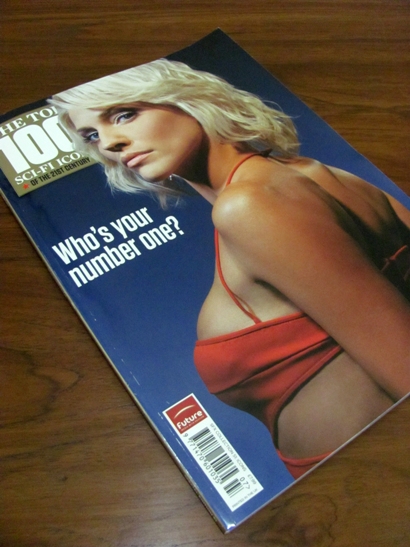 Should I wait for a few da— nah, I’m reading it now.

Starting from 100, it’s hauntingly familiar, for which I’m glad. No sci-fi geek wants to pick up a magazine that claims to list the top 100 sci-fi icons and find s/he can’t recognize anyone! NOT A SCI-FI GEEK NOW, ARE YOU?!

Luckily, I’m still one. I start with this:

100 – Scorpius from Farscape. Then I see 98 – Annie from Being Human. Then Baby Doll from Sucker Punch. Memories flood though me. How I discovered Farscape. How I started watching Being Human when I lived in UK, holed up in my flat, loving the idea of ghosts, werewolves and vampires. How I won tickets to see Sucker Punch in Dubai and thinking that movie would make an awesome game. Sci-fi memories. Personal memories. Even painful ones really.

I carry on. Through the nineties I see superheroes, aliens, vampires. Moving to the eighties, there’s a powerful wizard, Gollum, people from Torchwood and Doctor Who (a recent discovery of mine), and so on. I trawl through the list, eagerly lapping up characters I know and love, and marking down TV series or movies I need to watch when I don’t recognize someone.

Then, this took me back to when I was a kid.

I loved watching Hercules (Kevin Sorbo) and Xena (Lucy Lawless) on Dubai’s Channel 33. Xena was probably the first time I realized concepts such as lesbianism existed. Even though the censor board here chopped anything inappropriate, innuendo stays on, doesn’t it? The series shows it’s okay to be gay. Even Xena’s doing it.

I move on. I see characters from Buffy! Angel! Supernatural! Star Trek! Harry Potter! Star Wars! LOTR! Misfits! Firefly! So, so much more!

And then the finalé! The wonderful end… Nathan Fillion. He beat the Doctor! And after watching Doctor Who, let me tell you, the Doctor is hard to beat. There’s also an interview with Fillion, different to the one linked above.

There was also this double-sided poster in the magazine: 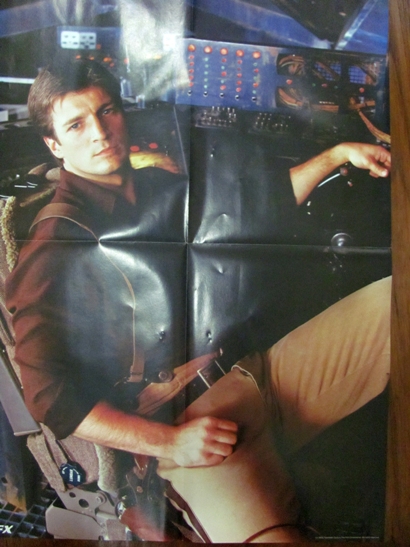 …of which currently, I can see the cast, smiling at me from above my desk in my room.

In the magazine, you get to see so many advertisements for sci-fi events happening in the UK. I feel a stab of pain knowing I was unable to hit some of those during my stay there.

I know the Middle East Film and Comic Con is coming up sometime this year – don’t ask me when! The organizers have hidden this secret better than Voldemort’s hidden Horcruxes. Anyway, I know the event is happening soon, and while I couldn’t be more excited, I seriously wish for more event organizers to realize, and tap into, the immense sci-fi market in this region.

I’ve even managed to convince a group of friends to come costume shopping. Yep, we’re cosplaying for the show. I’m planning to be Princess Leia (and since I’ve been getting the ridiculous follow-up question every time I say this…I’ll answer it first: No, not the gold bikini version from Return of the Jedi; it’s going to be the white dress from A New Hope) and I’ve got a few elves and Jayne Cobb for company. Might even get an Inara if the potential cosplayer gets her head around being a space-age “companion”.

So if I haven’t spelled it out enough: we’re a sci-fi mad market. We’re here. We’re hungry for more. So…how about you give it to us?

Freelance editor, writer and emcee. Former Group Editor of the Hospitality Group of magazines and websites at ITP Media Group. MA Magazine Journalism graduate from the University of Sheffield. View all posts by Devina Divecha