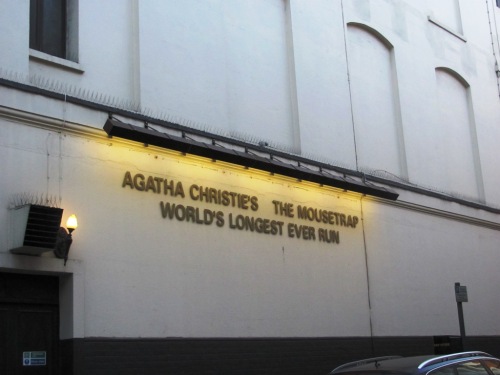 I’ve always wanted to see Agatha Christie’s play, The Mousetrap, and I decided now was a good time as any. I toddled off to St. Martin’s Theatre (map), situated towards the end of the picturesque Seven Dials area of London, with tickets for the upper circle. As a matter of interest, it was the 24,217th performance of the play that I was about to watch. I managed to get the front row seat, which was extremely amenable to watching the show without bobbing heads in front of me.

The curtain rose, the lights went out and we heard a scream… the show was on!

I’ve only ever been to one theatre production before this one, but I must say, St Martin’s Theatre was absolutely beautiful. The interiors were mostly made out of woody browns and lush, velvety reds. The seats were a bit tight (but then again, I didn’t take off my thick coat) but comfortable.

The basic premise of the play circles around 7 strangers stuck in Monkswell Manor Guest House, cut off from the rest of the world due to excessive snow, and their numbers become 8 once the enterprising Sergeant Trotter (Marcus Webb – superb actor) skis in. He tells them that he has come to investigate a murder, which took place in London and explains why he has reason to believe the answer lies in that very house. The play, performed in two acts, sees the unravelling of the mystery.

I shall not spoil the surprise here, although those who own copies of the book or impatient Googlers might already know the ending. Personally, I have the book, although I’d read it only once and around 8-10 years ago. That was why I happily went into the theatre, blissfully ignorant of what was about to happen. And that, I think, added to the quality of the show. In addition, at the end of the show, the actors kindly request the audience to become their partners in crime and not reveal the ending to future theatre-goers.

The performances were great – with the quirky Christopher Wren (played by Ashley Cook) capturing everyone’s attention and funny bone. I loved the intensity of Ann Wenn who played Mollie Ralston; she was superbly convincing. You’d think people might get bored of performing the same lines and actions repeatedly, but there was no sign of fatigue amongst these fine actors. I was riveted at every turn.

It’s one of those plays which I’d gladly love to see again.